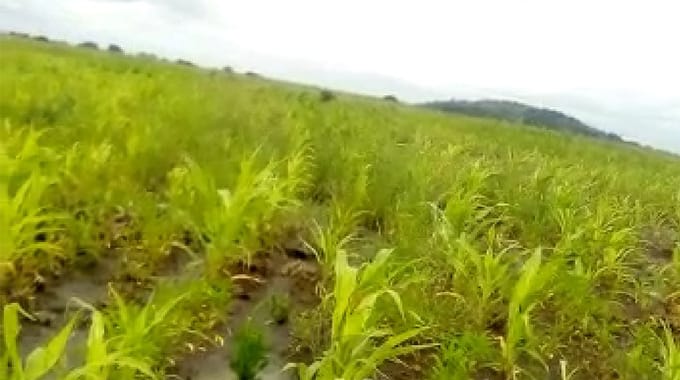 When the World Meteorological Organisation (WMO) released its long-range forecast results, in October 2020, the news of the La Nina phenomenon brought joy to farmers in Zimbabwe who had endured the poor harvests of the 2019/20 cropping season.

The results of the forecast indicated a 90% likelihood of tropical Pacific sea temperatures remaining at La Nina levels until the end of 2020, and a moderate likelihood for them to persist through the first quarter of 2021.

This would mean increased rainfall in southern Africa and a promising 2020/21 farming season.

As predicted, the rainy season started earlier compared to previous years, but challenges came with the excessive nature of the rains.

The often dry areas of the low veld received normal to above normal rains with storms causing considerable damages not to crops only but also to villagers’ houses.

Nyangambe Communal Area in Chiredzi North Constituency is one of the areas affected by the deluges. In some villages, the heavy and dark clays have been water logged, yet they are sticky when wet making it difficult for farmers to remove weeds and manage plant health.

Rivulets have developed in the nearly flat fields, and the water soaked the soils and illuviated the nutrients beyond the reach of plant roots.  In low lying areas, crops were even swept away by flash floods during these unusual torrents.

Saddening also were reports that a certain villager had a double loss after attempting to cross the flooded Nyangambe River with a cattle-drawn scotch cart carrying fertiliser. The cattle were swept away and the bags of fertilisers were also washed away.

The heavy rains which have not given these farmers enough time to manage their crops have a potential of leaving families food insecure.

Pests have also swarmed the fields with maize being the most affected plant.  However, it is a wake-up call to farmers who have defied the rules that a master farmer should follow as these farmers were trained and received the master farmer’s certificates.

Major changes were made when irrigation was introduced in some of these areas, yet it is not properly managed.

What should these farmers do or should have done?

One of the challenges mentioned is the formation of rivulets. Guided by Agriculture Extension officers deployed by the government, farmers should re-establish contours where they have been destroyed and create new where they haven’t been erected.

With contour ploughing, farmers plough or plant across the slope, furrows are established perpendicular to the slope. The technique does not only reduce soil erosion, but also promotes infiltration by reducing run off.

These contours can be reinforced by planting grass barriers to bind the soil. According to the Food and Agriculture Organisation of the United Nations, the method mitigates the impacts of floods, storms and landslides on the crops by reducing erosion up to 50 percent.

Farmers can also conserve the soil through strip cultivation and creation of shelter belts.

Another challenge mentioned is that of weeds. Most farmers in these areas rely on the hoe and the use of an ox-drawn adjustable cultivator for the removal of weeds.

However, weeding using a hoe is only possible when the soil is less moist and the cultivator doesn’t work where there is too much moisture, hence the need for alternative methods.

Farmers can use herbicides to deal with weeds. In most communal areas, the use of herbicides is not yet pronounced, yet that is the only adaptive measure in these continuously moist conditions.

A range of pre-emergence, post emergence, selective and non-selective herbicides are available in shops such as Farm and City at affordable prices. Examples of these chemicals include Round Up and Diquat.

It was observed that most of the crops which were washed away were grown in river banks. Ideally, all farming activities should be done at least 30 metres away from the river banks.

Stream bank cultivation despite giving good yields from alluvial soils does not only affect the farmer in the event of floods, but also affect other aquatic lives. Chemicals washed into the river may contaminate the water.

Fertilisers washed into the river may also cause eutrophication – excessive concentration of nutrients in the water which results in a dense growth of plant life; the decomposition of the plants depletes the supply of oxygen leading to the death of aquatic animals.

It also leads to increased siltation of rivers and dams, and eventually contributing to the shrinking of water bodies. Farmers should therefore desist from streambank cultivation as its problems outweigh its benefits.

Primarily, farmers should listen to updates on weather forecasts so as to make informed choices relating to planting, spraying and harvesting operations.