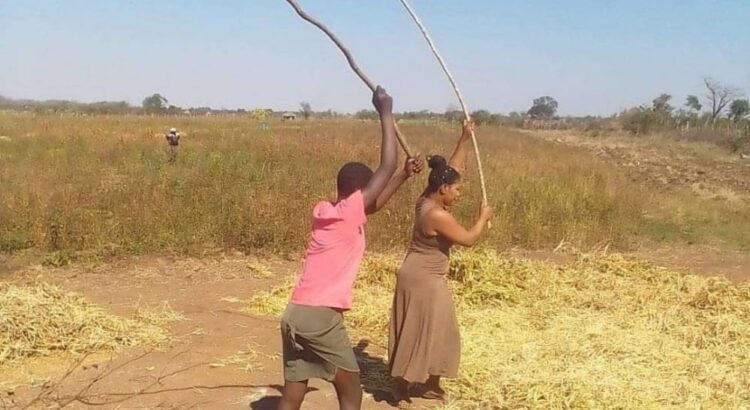 When the year turns on its heels, through a cool winter into a hot summer, farmers are relieved from the most daunting task associated with wheat production, protecting the grain from birds. Most smallholder farmers do not use repellent substances against birds, neither do they use scarecrows to scare away the pests. They wake up as early as 4:00am to get into the fields and guard the crop.

When the leaves begin to turn brown, farmers get temporary relief. The period is followed by harvesting. Smallholder farmers especially in Chiredzi North do not have sophisticated equipment for harvesting; they rely on human labour. Men and women of different age groups get into the fields early in the morning equipped with sickles and empty containers to cut the heads which contain the kernels.

The kernels are sometimes transported home using ox-drawn carts and sometimes on women’s heads. The hectarage is often between two and five hectares, making the harvesting process laborious. The heads are spread on the floor (sometimes cow dung polished floor) and allowed to dry. Threshing involves using heavy sticks to separate wheat kernels from the stalks. This process is then followed by winnowing to separate the wheat from chaff.

What can be done?

To guard the grain against birds, there are chemical repellents that can be used and these can be obtained even from the Grain Marketing Board. Homemade remedies can also be used, with a concoction of chili peppers, water and vinegar being the most common. However, chemical methods are not eco-friendly, therefore non-chemical methods should be prioritised. Farmers can use shiny objects such as unused CDs that can be dotted throughout the field. The use of scarecrows is cheaper for farmers, and all these methods can relieve famers from running after birds in the fields.

While manual harvesting can be a cheap and readily available strategy, mini-wheat harvesting machines can also be used to reduce labour demands. Farmers can come together and share the cost of purchasing the equipment which will then be jointly owned. The use of the machines will not only save on labour demands, but also on farmers’ precious time. The government should also intervene and support the role played by smallholder farmers in the country’s agricultural output. The revival of the DDF programme would ensure that tractors and other machines are made available to smallholder farmers.