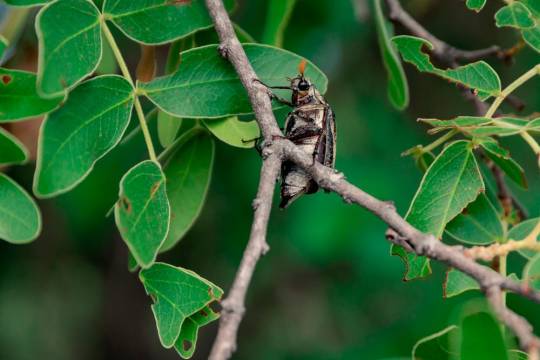 Few months into the rainy season is a period characterised by massive urban to rural peregrination. Urban folks, especially women throng communal mopane forests to harvest edible insects, particularly mopane worms. The mopane woodlands especially in Gwanda provide harvesting grounds for people who come from as far as Bulawayo to harvest the popular mopane worms for sell or for consumption.

The worm is a large caterpillar native to Africa, belonging to the Gombrasia belina species also known as Emperor moth. It feeds primarily on mopane tree leaves and in Zimbabwe, it appears about six weeks into the rainy season when the deciduous mopane trees would have developed fresh leaves. Ideally, the worms are supposed to be harvested when they have matured, and started crawling on the ground or down the trees. However, premature harvesting has seen people harvesting the worms whilst still in trees and this has been considered one of the most contributing factors towards their decline in Zimbabwe.

When the worms are harvested, traders or individuals remove the frass by squeezing, wash them and then boil. A little amount of salt is added and the worms are sun dried, packaged and taken to the market. Environmentalists have raised concerns over premature harvesting which has accelerated deforestation. There is a need to develop laws which regulate the harvesting of mopane worms to ensure sustainability.

The onset of the rainy is also characterised by the arrival of Cicada insects. In Zimbabwe, the insects are most common in mopane forests in the lowveld and are often harvested and consumed as relish. The insects belong to the Cicadoidea, and there are over 3000 species of Cicadas. They are known for their buzzing noise, actually produced by males which have vibrating membranes on their abdomens.

Cicadas are flying insects, therefore harvesting the insects is very difficult. During the night, the insects are attracted by light. People make a fire under the trees and the Cicadas fly down the trees making it easy to catch the insects. Preparation for consumption begins which removing wings, then boiling the insects for a short period before sun-drying or frying. The insects are normally eaten in rural areas.

Flying ants are some of the most common edible insects among both rural and urban folks. They are just normal ants which are sexually mature and in Zimbabwe, they are associated with the rainy season. The ants generally fly to establish new colonies. While people can catch them during the day, the ants can be easily caught at night since they can be attracted by light just as Cicadas. In urban areas, it is common to see people under tower lights gathering the flying ants in the evening. Preparing the ants starts with removing the wings, and there are different methods preparing them as relish.

Carebara vidua (tsambarafuta/ihlabusi) is also associated with the rainy season in Zimbabwe. It is a species of an ant that belongs to the Myrmicinae family. It is common in rural areas with minimum appearance in urban areas. It is caught and prepared the same way as flying ants.

Termites are also very prevalent in rural communities, but edible termites are gradually disappearing in some parts of the country. Termites are eusocial insects in the order isopteran, and are traditionally known for their delicacy in Zimbabwe. To harvest the termites, some harvesters use a soft grass culm to trap the insects. Termites can be fried and eaten as relish or even dried.

The insect is very common in Bikita district, Masvingo. The insect has provided a source of livelihood for rural people who sell them mainly along the Masvingo – Mutare highway. The Stink bug or Shield bug belongs to the order Hemiptera, and is one of the most sought after edible insects in the country. Villagers in Bikita climb trees or use wooden crooks to bend branches and collect the insects.

While harurwa is common in Bikita, Mhondoro is home to the Chafer beetle, also known as the Christmas beetle, a dark red bug. Just like other insects mentioned, the Chafer beetle is common in the rainy season in Zimbabwe, and has become a popular seasonal snack. Harvesters shake them off or pluck them from the tree. Chafer beetles can be boiled or fried in preparation for consumption.

The tobacco cricket is one of the most common edible insects especially in Masvingo. Brachytrupes membranaceus belongs to the family Gryllidae, and is a form of relish for many rural communities in Zimbabwe. Unlike other insects common in the few months of the rainy season in the country, the tobacco cricket is most common during the harvesting season in Zimbabwe. Since the insect burrows, harvesters often dig to collect the insect. In preparation for consumption, they first remove wings then boil or fry.