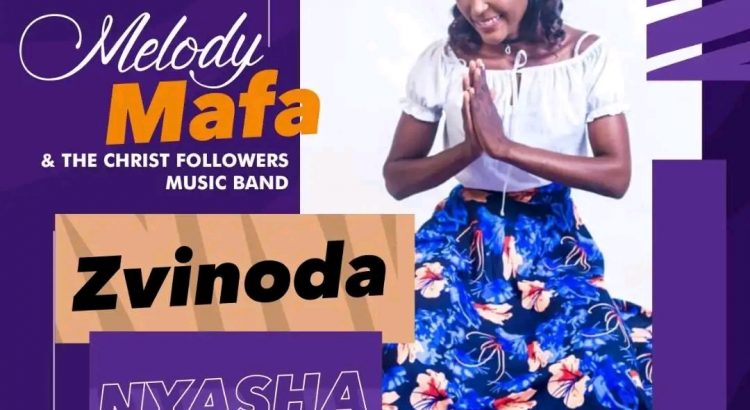 Music has often been an invaluable tool in promoting ethical practices in societies. It promotes spiritual harmony or order in the soul. Plato even said that “music is a moral law. It gives soul to the universe, wings to the mind, flight to the imagination, and charm and gaiety to life and to everything”.

It is a tool that gospel chanter Melody Mafa who leads The Christ Followers Music Band has been using in cultivating the ethos of morality and spirituality amongst her followers. Her gospel flavour is never short of moral ingredients. It’s genuine entertainment with a purpose. It is therapeutic.

For Melody, an album should fulfil the quadruple purpose: educate, comfort, entertain and soothe. Her latest project is a six-track album titled Zvinoda Nyasha in which she featured Evangelist Nyasha Chimukwe. The tracks that make the album include Mwari Vatinonamata, Nyika Yatinorarama, Ndinoda Kuona, Mhosva Yake Ndeyei, Zvinoda Nyasha and Gore Remunamato.

In an interview, Melody Mafa said her favourite song from the six-track album is Nyika Yatinorarama, a solemn prayer in which she asks God for deliverance from the bondage of the evil and redemption from sin.

“My favourite song is Nyika Yatinorarama. It is a prayer, asking God to deliver us from the bondage of the evil that we cannot run away from without the Holy Spirit. We are living in a world like Sodom and Gomorrah.”

“We have friends and relatives who do not know God. So, in this song we are asking God to redeem us like what he did to Lot and his family, even though we are yet to repent,” she said

The talented gospel muso said she was inspired into the music industry by gospel artistes such as Rumbi Gatawa, Mathias Mhere, Fungisai Zvakavapano Mashavave as well as Pastor Charles Charamba.