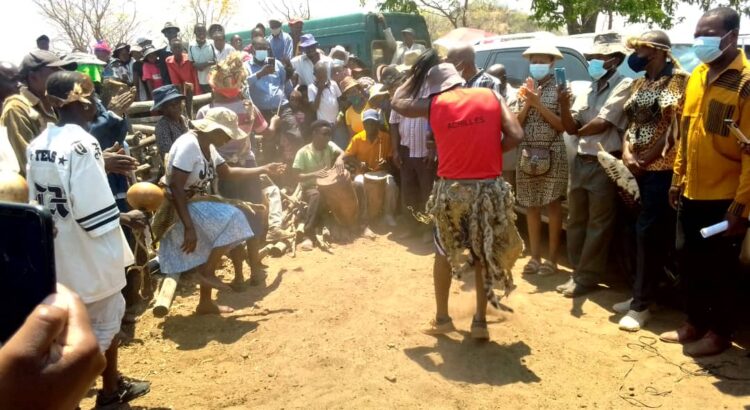 A large number of Khezi natives ignored the scorching sun to attend Pathisa Nyathi’s 70th  birthday bash, which also saw the launch of his autobiography on Saturday 17 October 2021 at Sankonjana under headman Silebuho Nyathi.

His autobiography is in the form of two books, with book one covering the years from birth in 1951 up to the end of 1973 when Mr Nyathi completed  his training as a science teacher at Gweru Teachers College, while book two deals with the rest of the life story from 1974 to 2021.

The historian could not fight back tears of joy from the remarks that were coming from his family, and friends. Among the attendees was Paul Bayethe Damasane who is the Deputy Chief Secretary for social services in the president’s office, and the historian’s close friend. Damasane described Mr Nyathi as an uncompromising hard worker, someone who doesn’t make a decision and continue sleeping.

“Pathisa can call you now and say Damasane I have decided to do this and will call you again telling you  he had begun doing it or he is done, his autobiography is a reflection of what we continue to see in him,” said Damasane.

The celebration was graced by Albert Nyathi, a renowned poet and also Mr Nyathi’s relative. Albert praised king Mzilikazi and also performed his well known poem “My Daughter”. He was also the master of ceremonies. The poet described Mr Nyathi as a knowledgeable person who deserves honour.

“We have a number of universities in the country, but there is one thing that bothers me, why  Pathisa Nyathi has not been honoured with a doctorate for what he has done, yet most of the universities use his materials,” said Albert Nyathi.

“He is Father Zimbabwe. Do you know Nkomo the father of Zimbabwe? This one is another Father Zimbabwe because most of your kids, some in foreign lands have done a lot because of this man’s knowledge,” said Ananias.

Pathisa Nyathi has dedicated his life to Arts, culture and Heritage and is the founder of Amagugu Heritage which he runs with his son, Butholezwe Nyathi.  The historian has broken the record by penning 65 books.

Pathisa said he has been writing biographies for other people without him writing about himself and he decided to celebrate his 70th birthday with his autobiography at hand. His children described him as a  kind father who is supportive.