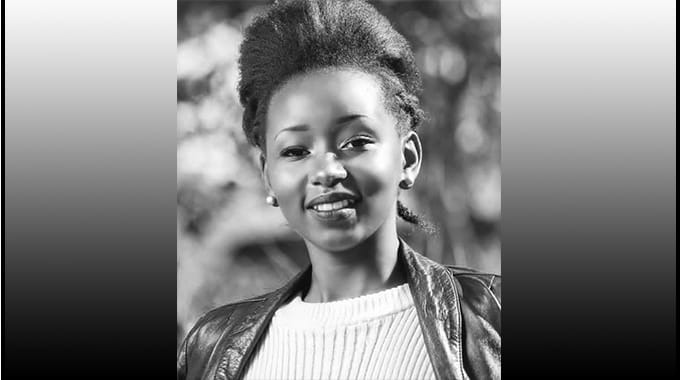 My name is Khulekani Ndlovu, an eighteen (18) year old poet (stage and page), actress, writer, upcoming model and upper six science student at the Marondera High School. I’m originally from Bulawayo but was born and raised in Marondera.

My first attempt on poetry was in July 2017 when I took part in the school festival known as the SASSAF competition and I only proceeded to district level. In the same year I joined an international group called poetry planet with thousands of participants and I managed to get featured in the heart to heart mosaic anthology as the youngest poet. In 2017 I also shot my first poetry video called “Black Widow”. The passion I had for modelling which was brewing inside me was maturing and I was driven to hunt for opportunities. I connected with Mr Jonathan Denga who was once a successful model. He was ready to offer assistance but unfortunately I had a hard time managing time and school so I had to retreat.

I believe failure is an unpleasant ingredient which, however, makes success a lot sweeter. So in 2018 I attempted the SASSAF competition again and proceeded to national level. Unfortunately, the event was cancelled due to the cholera outbreak. In May and July I was featured in the Sunday mail newspaper as Marondera High’s ‘wonder woman’ because of poetry. In the same year, I managed to connect with Mr Albert Nyathi, who then became my mentor. In November 2018 I performed at the Arts festival held at the theatre at the park where I connected with Mrs Virginia Phiri and during the same week I performed before delegates from all over the continent with my mentor (Albert Nyathi) on the Innovation Africa Day. In 2019 I performed at the Up in Smoke poetry event and I never forgot how Mrs Virginia left packing her bags before an important trip so she could come and support. I managed to grab the attention of my mentor’s mentor Professor Fred Zindi and he graciously acknowledged my talent. In the same year I entered a school modelling contest and became Miss Marondera High School.

Year 2020, has been one of the juiciest for I have learnt how to work harder and trust in God’s grace which he gives lavishly. I have learnt that life is a blank page on which we write our own story for we are masters of our destiny. In January, after listening to my heart and screaming passion for acting I made my own short film in which I was the director, voice-over, script writer and lead actress. This was my first attempt and I continued to practice and perfect my talent and I later did a monologue called “father” which is on YouTube.The name of the short film is “I AM A WOMAN” and it seeks to reflect on the abuse and violence which some women face in different environments. Early this year I got a chance to be interviewed on TV about this short film. I then proceeded to become a presenter for the One More Time show by Angel Arts production and later joined their acting crew for the “Zvirimudzimba” drama series. In May I joined the Africa Super Model pageant and managed to push my brand and votes up to the second place. This was an overwhelming experience because I was always a few steps from quitting but I battled with everything within and out of me up to the last minute because I never lost sight of where I want to reach in this industry. I also got exceptional assistance from Mrs Lynette Ndoro, a life coach and my mentor too. Now I await the grand finale. In the same month after a virtual meeting with Mrs Elsubie Verlindern of International Arts Talent Showcase (IATS) agency, I did an acting audition with IATS and passed. I was supposed to go to South Africa in September to audition before Joey Hunter, Nate Butler (America’s got talent), a representative from Tyler Perry studios cast crew and someone from The Voice, but l had not funds. I did not stop pushing for my brand so I got featured on the NewsDay website, 263chat, Zimbabwe social media page and ZimCelebs official page.  I just finished working with the National Arts Council of Zimbabwe on a UNICEF project; I did a poem on COVID-19 nutrition. In December I performed on the world AIDS Day together with Albert Nyathi. I also did a poem on the virtual SAYWHAT National Students Conference.

This whole journey has been quite a remarkable experience as I blossomed from the bud and got confidence to take on the world without fear. It is my dream and hope that by God’s grace I will be able to motivate the youths to fight for their dreams without fear; for we are living in a world of limitless possibilities.