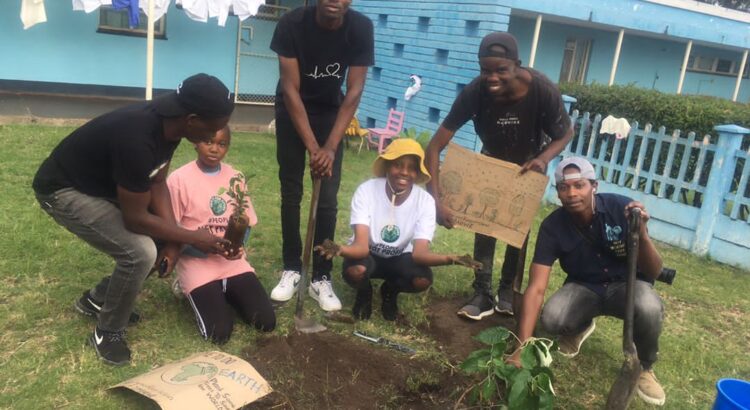 Zimbabwe Environmental Club (ZEC) on Friday celebrated Earth day at a children’s home in Harare with a tree planting exercise. The organisation described its inaugural programmeas a harbinger of related action-oriented environmental awareness programmes to come.

Earth Day is an annual celebration which began in 1970 as an environmental movement, and has become a widely observed secular holiday. The day, observed on 22 April every year is a reminder that the Earth and its ecosystems provide us with life and sustenance, hence the need to turn our attention toward the environment and raise awareness about threats to its well-being, from air pollution to climate change.

Since 1970, Earth day celebrations have played a significant role in raising awareness on environmental issues. This year’s celebrations were held under the theme “invest in our planet”, calling for businesses to shift to a greener, cleaner and sustainable practice and highlight the need to save the planet and leave it in a better shape for future generations.

Cognizant of the need to reduce climatic changes through revegetation, ZEC commemorated the day through tree planting.  The trees planted include indigenous species such as Msasa and exotic fruit trees.

Asked the reason behind the choice, ZEC programmescoordinator Spencer Tafadzwa Muvezwa said most indigenous trees such as Msasa take long to grow, yet they are often targeted by firewood poachers. He added that planting fruit trees provides incentives for participation in ecological restoration.

“We chose indigenous species because they are under threat from firewood poachers, yet they take long to grow, and planting fruit trees incentivises public participation in the restoration of our ecosystems since they provide direct benefits.”

Posting on Twitter Malaika Kurotwi, a young Harare based climate activist who took part in the tree planting exercise said she was inspired by the bravery of a 10-year-old girl who joined the action-packed awareness programme.

“Today I was joined by a 10-year-old girl, she said I inspire her and she’s ready for change, but surely, she inspired me with her bravery, reads the tweet.

Globally, activists observed the day in many different ways including tree planting, carrying out education and awareness programmes on climate change and environmental issues and planned demonstrations.

Tweeting about the day, the World Health Organisation said air pollution kills 13 people every minute due to lung cancer, heart disease and strokes, and has called for fossil fuels to ‘stay in the ground’ to reduce air pollution.