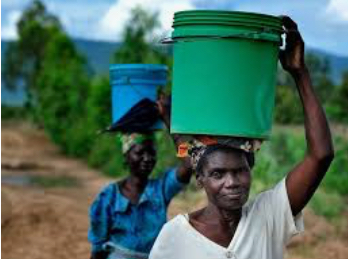 Most rural communities in Zimbabwe still rely on ephemeral wells which only provide water during and in the immediate post rainy season. Extreme climatic conditions such as frequent droughts caused by climate change result in acute water shortages for both animal and human use in most rural areas.

It’s common in Crown Range, Chiredzi, to see the beneficiaries of the Fast Track Land Reform with ox or donkey drawn carts heading to Chiredzi River (about 5 to 15km away) to fetch water for domestic use and for their animals in the scorching sun of the semi-arid lowveld. If the climate situation worsens, the shrinking of Manjirenji dam is likely to happen, worsened by siltation which has reduced its water holding capacity. This will eventually affect the flow of water in the river as much of the water comes through the dam.

The primary source of rural livelihoods is Agriculture, a highly climate-sensitive means of production. Not only drought affects agriculture, but other climate change induced disasters such as tropical cyclones contribute significantly to rural food insecurity. It was cyclone Idai which caused much damage in Chimanimani and parts of Bikita, worsening the climate change cased humanitarian crisis affecting the country. Crops were swept and buried in rubbles especially in Chimanimani, and no harvest was recorded in the areas extremely affected.

Drought also results in crop failure, and as climate change has worsened the drought crisis in recent years, rural people are yet to suffer more from the impacts of climate change. In most communal areas, food crops are grown on subsistence basis relying on natural rain. In the 2019/20 farming season, farmers in Matabeleland lost over 15 000 cattle to drought according to Matabeleland South’s Department of Agricultural Technical and Extension Services. This implies that if climate change remains unchecked, the irreversible consequences will continue to affect rural sources of livelihoods.

Worsening their vulnerability are poor disaster resilience mechanisms and climate change adaptive capacity, as well as lack of knowledge do adopt mitigation measures. Maize production under dryland farming has been declining over the years, with food aid being needed every year to ensure that households have adequate food.

Climate change mitigation and adaptation in Zimbabwe should include rural people. There is a need to educate farmers on the measures to adapt and be more resilient to climate change. Some activities in rural areas such as deforestation can be condemned so as to encourage people to contribute towards climate change mitigation. Climate smart farming systems such as the Pfumvudza/Intwasa can help in resilience and adaptation in rural areas.

The government has a role to ensure access to reliable clean water sources such as boreholes. There is a need to establish as many small scale to large scale dams particularly in communal areas to provide water for animals as well as for irrigation. Agricultural Technical and Extension officers should be equipped and capacitated to educate farmers on sustainable farming systems in communal areas.