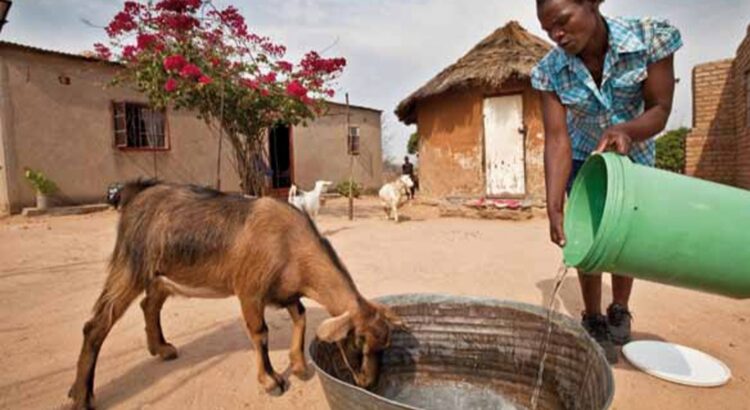 Zimbabwe is one the countries suffering the brunt of climate change in Africa. The country has not been spared from the adverse effects of climate change which include frequent droughts and tropical cyclones. The agriculture sector has been hard hit, worsening the problems associated with food insecurity. It is important to note that agriculture is a climate-sensitive sector and any change in climate patterns can affect productivity.

Climate change induced frequent droughts and their adverse effects have been reported in Zimbabwe. According to an ecological report done by the Zimbabwe Parks and Wildlife Management Authority, elephant calves were the most affected by drought and soaring temperatures in the Hwange National Park between August and October 2019. As reported in The Sunday News, about 100 elephants died due to drought in the Hwange National Park in 2019.

It was also reported that communal farmers in Matabeleland – the region naturally prone to drought – were seriously affected by drought. According to Matabeleland South’s Department of Agricultural Technical and Extension Services, by 3 January 2020, 15 596 cattle had been lost to drought.

Reports also indicate that in September 2019, 44% of the people in Matobo were food insecure and were in urgent need for assistance. Producers of the golden leaf were also hard hit as the 2019/2020 farming season was severely disturbed by drought. The Global Agricultural Geo-monitoring Initiative (GEOCLAM) forecasted below average rainfall for the 2019/2020 farming season and that was going to worsen food insecurity as observed today.

Urban councils water supply systems were also affected. In February 2020, Bulawayo City Council’s director of engineering services Engineer Simela Dube said that dam levels remined at 34% despite the rains received. This has seen residents receiving water once a week according to BCC’s Provisional Water Supply Restoration Strategy of October 2020, a health time bomb which exploded as cases of the outbreak of diarrhoea in Bulawayo suburbs such as Queens Park, were reported.

Not only drought and the subsequent water crisis has been the effect of climate change in Zimbabwe. Extreme climate conditions such as tropical cyclones, from cyclone Eline, Dione to Idai have affected the country. Cyclone Idai took lives and severely destroyed infrastructure mostly in Chimanimani, surprisingly, other parts of the country were dry. There is also evidence of a change in farming seasons. Communal farmers used to dry plant their crops (specifically cotton) from the 5th of October, conscious of the onset of the cropping season. Today, the onset of the rainy season is unpredictable and there is evidence of a shift in farming seasons, with the cropping season becoming shorter and shorter.

Projections on Zimbabwe in  Anna Brazier’s book indicate that  it is likely that by 2050 and until the end of the century there will be:

• A modest decrease in total amount of rainfall

• Changes to the onset and end of the season

• Erratic rainfall distribution across the country

• More droughts and floods that may recur in successive years

• Temperature increase of between 1°C and 3°C, which is greater than the global average

It is also indicated that these changes are likely to lead to:

• Reduced food security because of the impacts on agriculture possibly leading to increased undernutrition, particularly in children.

As indicated earlier, the agricultural sector is the hardest hit by the adverse effects of climate change. The projections show that the situation is not even improving, but worsening, hence the need for proactive measures to deal the negative impacts. Scientists have pointed out the strategies – in broad terms climate change mitigation and adaptation – which can be employed to deal with the effects.

Adaptation in the United Nations Framework Convention on Climate Change (UNFCCC)’s 2007 report is described as “the process through which societies increase their ability to cope with an uncertain future, which involves taking appropriate action and making the adjustments and changes to reduce the negative impacts of climate change”.

Adaptation to climate change should include:

• Addressing the drivers of climate change through strategies such as the increase in the use of clean sources of energy, – investment in solar power and hydro-electric power – and enhancing carbon sinking by planting, replanting and protecting existing trees. This also includes the reduction in the use of fossil fuels and promoting the use of green fuel.

Mitigation measures farmers can adopt include:

– Making use of weather forecasting and advice from meteorologists.

– Using underground stores rather than dams.

– Mulching and use of drip irrigation to conserve water.

3 thoughts to “Zimbabwe suffers the brunt of climate change”