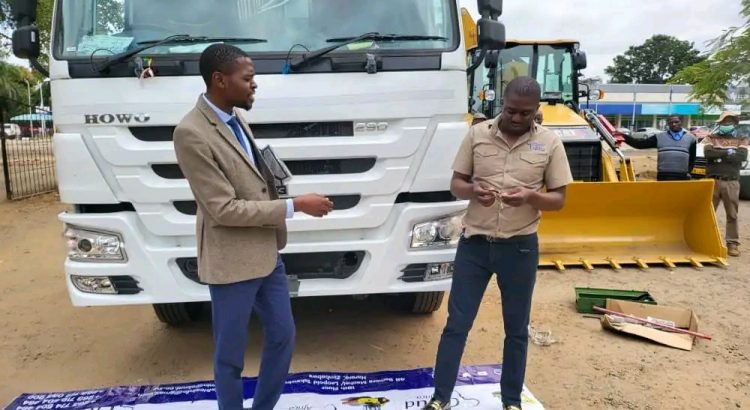 Permanent Secretary in the Ministry of Information, Publicity and Broadcasting Services, Nick Mangwana said the TLB will be used to service Merlbourne Park stands, from which most of the funds to purchase the machine were generated.

Chiredzi Town Council ward 3 Councillor and Vice Chairperson Ropafadzo Makumire said in addition to the equipment already delivered, a fire engine is on its way.

“Chiredzi Town Council has procured a refuse compactor and a  tractor loader backerhoe (TLB) at a cost of RTGS $ 16 million and US$ 115 000 sequentially.”

“The refuse truck was bought using tax payer’s money (devolution fund) and the TLB via internal funds (rates proceed from land sales). Both suppliers Cloud Africa and Bazerm handed over the equipment to council and the city fathers are happy with this milestone achievement. The fire engine is on its way.”

Councillor Makumire thanked residents and other stakeholders for their support as well as his fellow councillors.

Writing on his Facebook page following the official handover of the essential equipment by the suppliers to Chiredzi Town Council, Ward 4 Councillor Mr Liberty Macharaga also thanked residents for paying up their rates on time as this has enabled council to generate funds for the purchase of the equipment.

“The feeling you get after doing the right thing for your community… The official handover take over from the suppliers to council. 2022 has been good to us in equipping councils. Special thanks to HE ED Mnangagwa for availing Devolution funds and our loyal residents who paid up their rates in time”, wrote councillor Macharaga.

Chiredzi Town Council has to date implemented various infrastructure development projects with devolution funds. The rehabilitation of roads in the town financed under the Emergency Road Rehabilitation Programme also changed the face of Chiredzi town.