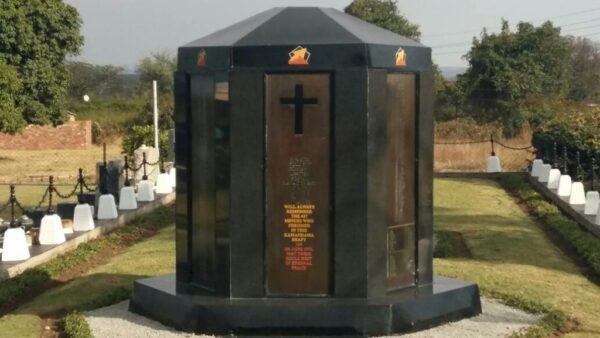 By Burzil Dube, The Standard

THE 50th Kamandama Mine Disaster commemorations has come and gone. The fanfare was top-notch despite “last minute” change of programme after the guest of honour failed to make it to this grand occasion.

As per tradition, this year’s golden jubilee commemorations were held at the then Kamandama underground shaft entrance where 427 miners lost their lives. The sad event is immortalised on June 6 of every year at a fixed time.

To the uninitiated, the Kamandama Mine Disaster happened on June 6, 1972 where 427 miners died in this particular underground mine whose cause was attributed to methane gas explosion.
This massive explosion forced the permanent closure of the mine and many families lost breadwinners as well as relatives.
It is said proto teams came from afar as South Africa and other neighbouring countries to render expert assistance, but it was all in vain hence perennial sealing of the mine entrance.
A proto team is an elite group of mine workers trained to perform underground mine rescue activities.
Back to the golden jubilee celebrations whose preparations and execution has earlier been described as a cut above the rest. Yours Truly was once involved in the thick of things of these particular commemorations albeit on another employment level.

However, that is part of history which might prove to be handy in the foreseeable future especially on travelling and touring side of things because the memorial site is a proverbial low hanging fruit in the world of tourism.

Yours Truly has in the past written extensively about how the Kamandama memorial site can be turned into one of most sought tourist places within Matabeleland provinces if properly packaged by tour operators.

Even though this might seem to be a pie in the sky operation, the number of enquiries received following publication of this memorial site in several travelling and touring columns is high.

Yours Truly has decided with immediate effect to call the whole area encompassing the Kamandama Memorial Park as this befits its current status and has to be continually well maintained.
However, a mole has revealed that plans are afoot to expand the whole Kamandama entrance area in time for next year’s commemorations as part of ensuring that a sizeable crowd is well accommodated.

As earlier alluded, this year’s preparations were a cut above the rest and there was no room for prophets of doom to do their usual pessimistic antics as everything was smooth sailing.

The gigantic tombstone where names of all 427 miners are inscribed was spick and span as well the rectangular ankle height shiny mini wall where various wares were displayed drawing unforgettable memories.

Some of the memorabilia on display include helmets, pots, plates, old coins, spoons among others which are reported to have been used by deceased miners before they met their painful fate.
A couple of tour operators intimated to Yours Truly that the site has all qualities and capabilities to be also included into World Heritage Sites, which is the most prestigious tourism description.

And they appeared to be confident about this issue! World Heritage Sites are natural, cultural, man-made sites, areas, or structures that demonstrate influence or significance in a global context. Such sites are nominated and designated by World Heriatage Convention, which is a Unesco organisation.

Some of the places, which have been designated or classified under the acclaimed sites Great Zimbabwe Ruins, Victoria Falls, Khami Ruins and Matopos Hills, among others.

It is in the Matopos Hills where Cecil John Rhodes, Leander Star Johnson, Major Allan Wilson (of the Anglo-Ndebele War) are buried and this place is among the most visited places by both local and foreign tourist.

Time is nigh for the Kamandama Memorial place to be also inducted in World Heritage Sites as it has all the necessary qualities that might be needed for this reality to become a dream.

However, the onus is not on Yours Truly alone.
Together we can make it.