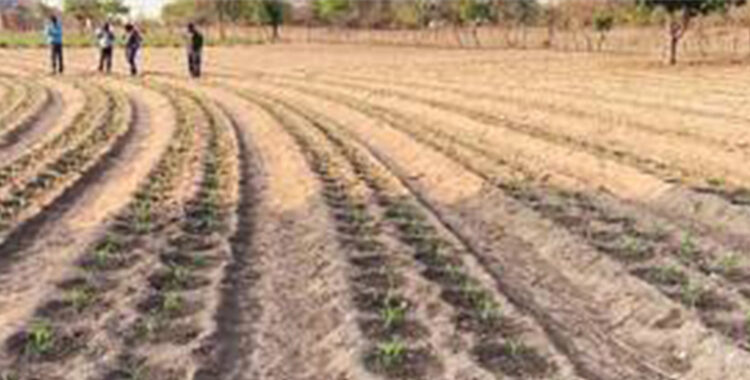 Frequent droughts have been affecting Zimbabwe in recent years, with climate change being cited as the major cause.

Crop failure caused by long dry spells and erratic rainfall has resulted in food insecurity in the country. Communal farmers who rely solely on crop cultivation for food have been seriously affected.

Farmers therefore have to come up with strategies to adapt to climate change and mitigate the challenges associated with food insecurity.

The government has supported the concept of Pfumvudza/Intwasa – conservation farming – to improve productivity and ensure enough food is available particularly for rural communities.

Although most farmers in resettlement areas have enough arable land to meet their annual food requirements, production has been declining as a result of climate change.

This is also worsened by rural-urban migration as the youths are leaving the countryside in search of greener pastures. From my personal observation, most young men from the age of 17 have left the rural areas for South Africa or towns.

This implies that the “economically inactive” group has remained to work in the fields, hence a shortage of active labour. It is sad to note that the farmers spend long hours in the fields, some with adequate inputs, yet yielding little to sustain their annual food requirements.

Pfumvudza/ Intwasa in this case is an appropriate solution since it involves the utilisation of a small piece of land to produce enough for the family with minimum labour requirements. Moreover, a Pfumvudza/Intwasa plot can be kept alive with buckets of water meaning in the event of drought or dry spells, farmers can still produce enough to feed their families.

It is a concept developed from Conservation Agriculture, which according to the Food and Agriculture Organisation is a crop production intensification approach under which farmers ensure the efficient use of resources on a small piece of land in order to optimise its management.

As noted earlier, the rural community is suffering from the shortage of active labour and Pfumvudza/Intwasa is ideally a solution as it utilises a very small piece of land which can be managed even by the “economically inactive group”. The concept utilises 16m x 39m plot which is easy to manage, prepare, mulch, weed and even water in the event of a dry spell.

Each 16m x 39m plot requires 1,2 x 6kg agricultural lime, 2 x 8kg of basal fertiliser, 3,2 x 1kg of maize seed, 4,2 x 4kg of top dressing for the 1 456 planting stations. The land should be prepared obviously before the rainy season and a thick mulch layer should also be made available.

Planting then follows, and it is important to note that the fertiliser and lime should be covered with soil and a depth of 5cm is left for optimum plant growth.

The government has been in full support of the concept through training programs and the provision of inputs which means that farmers are equipped enough to implement the idea and ensure food security.

About 1.8 million beneficiaries of the Climate-Proofed Presidential Inputs Scheme are expected to establish three Pfumvudza/Intwasa plots over the 2020/21 cropping season.

A single plot ideally produces enough for a family of six meaning the remaining two plots will feed the national supply chain through the Grain Marketing Board or through individual sales. Generally, the concept recommends crop rotation, obviously with a legume like soya beans, which can provide income to supplement the basic needs.

If one asks subsistence farmers in the rural areas what exactly gives them a headache when the rainy season approaches, the answer is obviously lack of inputs, particularly seeds. They use the same grain from the previous harvest as seeds, which eventually affects yields.

They also need fertilisers and chemicals yet they do not have capital to purchase such necessary inputs. Pfumvudza/Intwasa is done on a small piece of land meaning less inputs are required to produce enough to feed the family.

The concept has also been tested and it yielded good results, meaning it’s what Zimbabwe needs to feed itself and be Africa’s breadbasket once again. Success stories have been reported in Gokwe South district where Mrs Elifa Mpofu has managed to produce enough food for the family through Intwasa.

An elderly widow, Gogo Matilda who received Intwasa/Pfumvudza training from FfF implemented the practices and yielded enough to feed the family for the whole year. With many people having taken up the concept, food production is expected to increase and ease the problem of food insecurity.

The good side of Pfumvudza/Intwasa is that it can be implemented by anyone in the rural areas whether one has beasts for tillage or not since the concept is based on zero tillage.

Moreover, minimum labour is required and the farmer gives much attention and effort to a small portion which can yield enough and drive hunger out of many homes.

One thought to “Pfumvudza/Intwasa, solution to food insecurity in Zimbabwe”