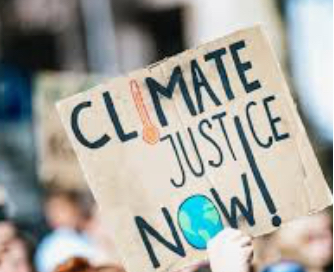 Climate change is a very relevant topic in today’s world, as it affects nations through droughts, floods, mass migration, alternating temperatures as well as food shortages, which in turn lead to food insecurity.

Such effects reveal the need for climate justice,which intends to find a permanent solution to a problem that is threatening global climate.

Organizations such as Green Peace and Extinction Rebellion have been at the forefront in the fight forclimate justice. Personalities such as Greta Thunberg, one of our own here Tafadzwa Masango, amongst others have added their voices, together with the former Secretary of State for the United States senator John Kerry to concretize the world about the need for climate justice.

The achievement of climate justice requires first a definition composed of a synthesis of multiple approaches and practices of environmental justice found in literature, that is climate justice  ensuresthat people and the planet are treated fairly in the ways which we try to reduce further climate change, by cutting down the amount of fossil fuels we burn to produce energy.

Let’s spread the concept of climate justice via all social media platforms which are accessed by all. It helps in conscientizing the public, and encouragingmany people to join the fight for climate justice.