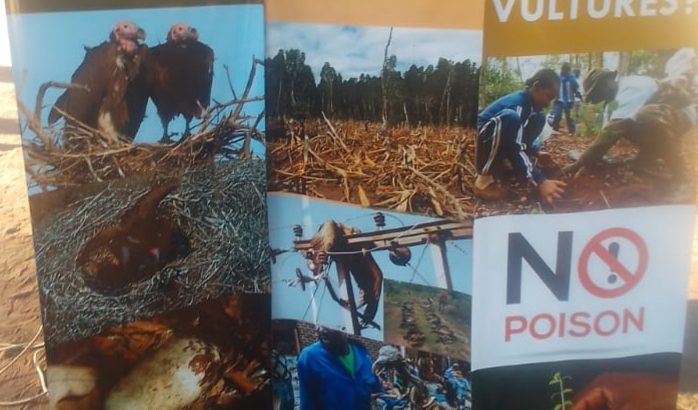 Through a workshop held at Nyangambe Secondary School recently, over thirty villagers from Nyangambe Communal Area were taught on the need to conserve vultures as well as their importance in ecosystem sustainability. The workshop which was facilitated by a UKZN, SA PhD student Kudzanai Sandra Dhliwayo was held following the 2022 International Vulture Awareness Day celebrations under the theme “Help Save Vultures.”

The purpose of the workshop was to raise awareness on vulture conservation by educating communities and various stakeholders on the importance of vultures in the ecosystem as well as their role in supporting the provision of ecosystem services that the communities rely on.

“Conservation without communities is not conservation. Many a times, conservation efforts fail because conservationists may not recognise the important role that communities play with regards to this. If only we can work together with communities for a common purpose, then we may win the battle,”said Dhliwayo.

The maintenance of a healthy ecosystem is one of the key roles that vultures play. They serve as nature’s garbage disposers since they are able to keep the environment clean and free of contagious diseases. This is enabled through their extremely corrosive stomach acid that allows them to consume rotting carcasses. Since the scavenged leftovers are often infected with anthrax, botulinum toxins, rabies and hog cholera that would otherwise kill other scavengers, the birds prevent the diseases from spreading by ridding the ground of dead animals.

The community of Nyangambe last had a sight of these vultures around 2010, and as such they showed so much concern on the disappearance of these birds and are willing to see them back. The cutting down of trees as well as the invasion of the woodlands by illegal settlers around the area are some of the reasons that may have pushed the majestic birds away.

“Residents of Nyangambe showed that they loved these birds as they showed keen interest in wanting to bring them back. A community with such an attitude can surely go a long way in the conservation of vultures,” said Dhliwayo.

Several strategies can be implemented to attract the vultures into the conservancy as well as to save them from extinction. A cross reference of the Ugandian conservancy held on September 10, 2022 by the Uganda Wildlife Authority showed that carrying out a vulture census as well as documenting these birds makes the management of their population as well as the implementation of the conservation measures easier, as revealed by the National Coordinator for Wildlife Clubs of Uganda, Hamuzah Ssesanga

Among other strategies to save vultures from extinction, conservationists can carry out captive breeding in zoos or in sanctuaries where they can involve experts in carrying out the task. This makes it easier to document and manage the birds and their population increase per given period.

Population survey can also be implemented. For example, the Victoria Falls Wildlife Trust together with South African NPO, VulPro, have initiated a project to monitor the spatial movements of vultures. Since these magnificent birds can travel over large distances in conservation areas as clean up crews for diseases as well as playing an important role in biodiversity. There is a thought to implement a solar tracking unit that can be fitted on a bird to closely monitor its movements.

Nyangambe Community runs a thriving wildlife conservation project, a Save Valley Conservancy buffer in Chiredzi North. The project is jointly owned by 181 families from the resettlement area and is currently run in partnership with Leloma African Hunting Safaris.