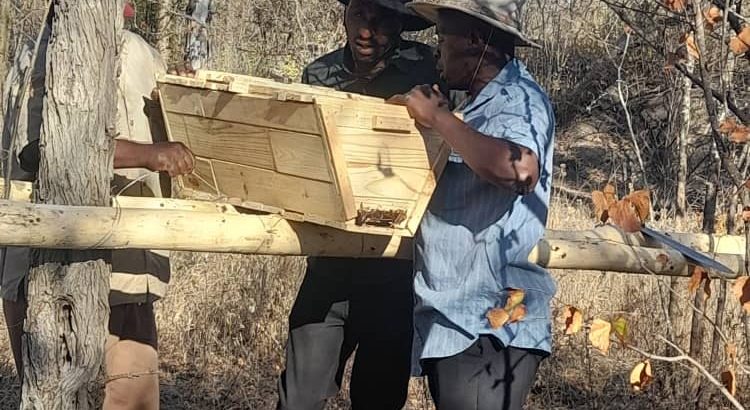 Twenty-six families from Nyangambe Communal Area in Ward 23, Chiredzi North have benefited from an apiculture project being implemented under the Resilience through Accelerating New Community-based Holistic Outcomes for Resource Sustainability (Resilience ANCHORS) programme.

Resilience ANCHORS is a USAID-funded programme that seeks to increase the capacity of communities to sustainably protect and manage community-based natural resources and the wildlife economy in anticipation of future shocks an stresses. In the Nyangambe Communal Area, the project complements the existing conservation programme as the community runs a wildlife conservation project where forty-five beehives were installed recently.

The beekeeping project will broaden revenue streams for the beneficiaries to strengthen their resilience in the face of both climate and economic shocks. The beneficiaries were also trained on trapping bees, collecting honey from the beehives and how to conserve bees.

Commenting on the project following the establishment of apiaries in Nyangambe last week, Mr Brighton Mutovo one of the twenty-six selected beneficiaries said the project will generate income and help mitigate poverty in the community which is already bearing the brunt of climate change-induced drought.

Twenty-six people were trained on trapping bees, collecting honey from the beehives and how to conserve bees. The project will generate income and mitigate poverty in our community, said Mr Mutovo.

Mr Givemore Dzapasi another beneficiary also said the project is critical to the community as it enhances diversification of means of income and strengthens social safety nets in the face of drought.
Diversification of means of income has been identified as one of the critical measures that can be adopted to strengthen resilience to climate change, and the bee keeping project adds to existing agro-based revenue streams.