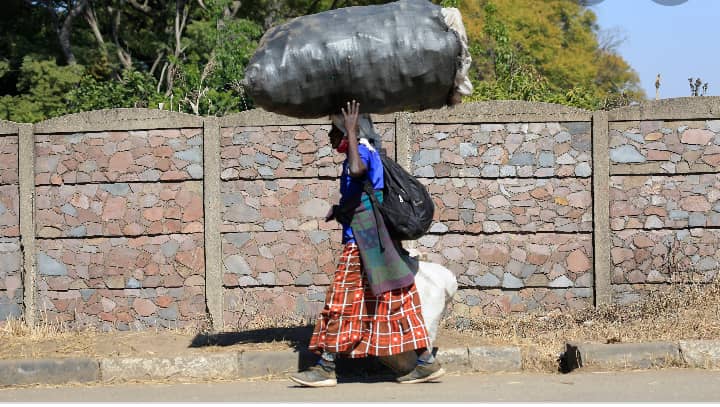 Waste recycling has not only kept the city environmentally sound, but has also enabled unemployed women to fend for their families and put food on the table as it has provided a source of income for them. It has dawned on women as a great opportunity for them to empower themselves, and through reusable waste collection and selling, they manage to scrape a living. A number of women are seen in the Bulawayo central business district, searching for empty plastic bottles and cans, carrying heavy loads of refuse sacks on their headsand backs. Children as young as eight wander the streets in search of scraps of steel that they collect and peddle.

In Makokoba suburb, refuse collection and selling is a wonted activity. Like busy bees, women, children and drifters buzz the small community, working hand in hand with TregerPlastics  in recycling plastics, empty cans etc. Women in dirty clothes are seen delving through refuse containers, while some spend the day smashing empty cans, some with babies strapped on their backs are seen filling sacks with refuse. A number of wanderers are seen walking around carrying loads of refuse bags on their backs, selling the  collected waste materials to the highest bidder. Primary school going childrenare seen pushing scotch carts, rummaging through garbage piles and some fighting over scraps. They walk door to doorscrounging for steel scraps. At the end of the day they sleep in full stomachs.

Most households in Makokoba suburb are child headed; these children have missed out on their childhood as they have to shift for their siblings. Over the years most of these children turned to pick pocketing and begging in order to survive. However, recycling has taken some of them off the streets;through waste collection and selling these children havebecome money earners and manage to fend for themselves.Women have also formed co-operatives and earn up to five hundred United States dollars through this trash-to-cash project. Through waste recycling, many families in this small community have escaped the grip of poverty.

Last year, the first lady Amai Auxillia Mnangagwa together with the Environment Management Agency (EMA)spearheaded the trash-to-cash project in support of the green economy. In an effort to empower women, some ladies of the night were taken through waste recycling training which has resulted in most of them getting off the streets, venturing into this project and sustaining themselves through waste recycling(Herald). It is pleasing that more women are taking part in this venture and continue to empower themselves, at the same time contributing to the maintenance of a green economy.