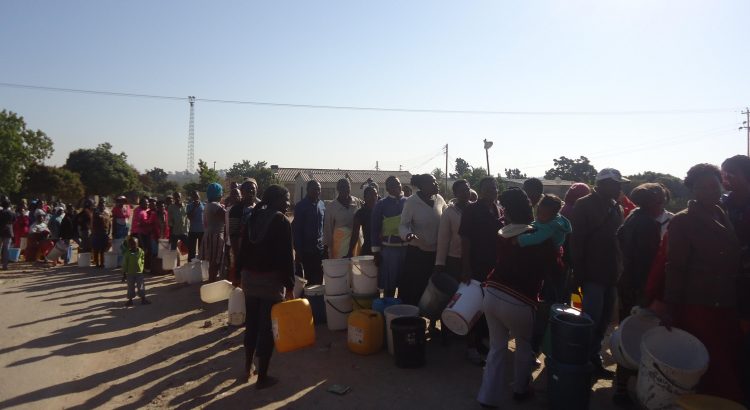 Most of Masvingo ‘s residential areas are facing continuous water shortages with the residents calling on the Masvingo town council to rectify the challenge that has persisted for over a couple of weeks now.

With the rainy season gone for a couple of months now, residents of Masvingo have begun what has always been a long dry and thirsty journey until the next rains. Taps have been dry and this has forced residents to rely on unsafe sources and are at the risk of water borne diseases.

Commenting on the current situation, Namatai Bapiro, a resident in Range said,

“Masvingo ‘s water problems have persisted for years and many legislators have come and go with no end in sight for the predicament.”

The town which is etched between two major water bodies, Kyle Dam and Lake Mutirikwi , most of its residential areas like Range, Tirivangu ,Jazire among others have not been developed to pump , treat and supply water and rely on one borehole.

Masvingo which has a total population of close to 50 000 and requires at least 29 megalitres of water everyone is getting 5 megalitres a day. To alleviate their woes, residents have resorted to digging wells and the rainy season offers relief as they often collect water from their roof tops, both these operations expose residents to waterborne diseases and in the latter case, asbestosis.

“This is an untenable situation,” bemoans one resident Maxwell Nyoka.

“We cannot continue to thirst for water when we have a lot of water around us.’

In Range residential area there’s one borehole which everyone in the location gets water from.

Speaking to one of the ladies who were queuing at the borehole on Monday she said,

“This is draining but we don’t have an option, I have to wake up at least before 5 o’clock in the morning so that I can get 5 buckets of water before going to work and when my children come back from school ,they will also come and que here so that we won’t run out of water at home.”

Meanwhile at the borehole people will be fighting and arguing with each other. Corruption is also there as others would not want to que but rather to just go straight upfront.

“People are always fighting here because of water and many people have also lost their buckets because there are thieves here”.

Another area with the same problem is Gwanze where residents are also getting water from a single borehole in the location.

Asked when the last time was they had water from their taps, Mr Chakanaka one of Gwanze’s residents said,

“Since last year we have had running water once and that was when there was a ZANU PF rally going on at the local shops and up until now we haven’t had any. We have stopped paying water to the city council because it’s no use, we are now basing on the borehole. It’s sad to note that there is no time you will ever find the borehole without people, it’s always working and that’s why it easily malfunctions,”he said

Meanwhile other locations like Rujeko, Yeukai only gets water at least from 4 am up to 8 am in the morning each and every day.