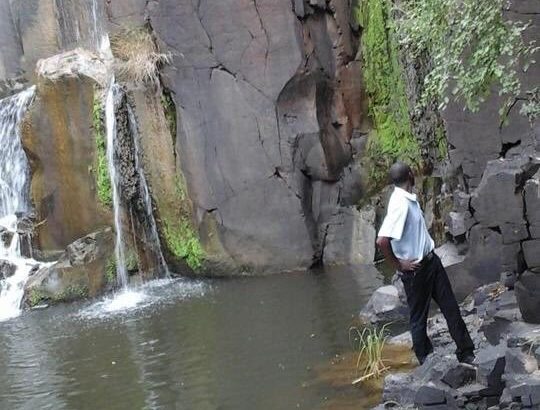 Zimbabwe’s large rivers are often characterized by alluring geomorphic features and the Sanyati river is no exception. It is on the Sanyati river in the northern end of Gokwe district where the iconic Gandavaroyi falls are situated. The falls form the biggest drop on the river, with its massive crater which is surrounded by steep cliffs giving a picturesque scenery.

The falling water from a higher elevation into a plunge pool where it is temporarily stored before disappearing into underground tunnels and emerge on the other side via connecting streams also gives the place a spectacular grandeur.

The name Gandavaroyi, loosely translated means ‘throwing witches into’ (a plunge pool). It is said that the falls were used as a litmus test for suspected witches and wizards who would be thrown into the estimated 50-metre-deep gorge that is near the falls. If they were witches, they would never be seen again, hence the name Gandavaroyi.

Although the practice was stopped decades ago, the falls are still associated with mystery as it is believed that the spirits of those who perished in the ‘natural guillotine’ still roam in the area causing unexplained disappearances.

Acknowledging the mystery associated with the falls, Earlman Jongwe from Hurungwe said, “I know Gandavaroyi Falls from a very young age. I have never been there because the elders used to say the rocks around the falls are slippery, one can slip and disappear.”

“One spectacular fact about that falls I heard was that the Sanyati River narrows towards the falls, the falls behave as if there’s a sinkhole underneath and water spirals downwards.

“It’s also reported that the pools below the falls are extremely deep, in seasons when the river is in its lowest capacity, it’s reported that if you throw one big rock into the pools it will take a couple of minutes to get to the bottom where one can hear the rock hitting the rocky surface.

“I don’t know how far true all these facts are, I also plan on  visiting the place in future because nature is my calling.”

Gandavaroyi Falls are located about 100km from Nembudziya Shopping Centre in the Gumunyu area between Batanai, Bhashungwe of Hurungwe district on the Sanyati river. Guests can get to Gandavaroyi either through Hurungwe or Nembudziya Business Centre.

As Earlman Gondo explains, from Hurungwe area, you take a drive through Magunje heading towards Chidamoyo Christian Hospital, then from the hospital, you travel southwards going towards Sanyati river, further down you get to Nyamufarira Village which is directly opposite Gandavaroyi Business Center (you can board off your vehicle and walk towards the falls), this spot is easily recognizable, it is where the road faces eastwards toward Batanai Business Center.

Besides visiting the falls, activities on the Sanyati river include photographic safari, bush walks, fishing and bird watching.